It has been reported that there were about 14 X-Flight RAF Police personnel dedicated to Barnham for the movements of weapons to and from the station. The vehicles used in the convoys were accommodated at the newly built "bottom site" MT yard.

Air Commodore Allisstone (Retd) who, as a junior officer, initially worked on Barnham's "Top Site" as a convoy commander, has provided the most information about the convoys.  This has been partly corroborated by a former convoy driver, an armourer and several RAFP who worked at Barnham during those days.   Further information has been provided by a Mr E.G Morgan, a Storeman from Barnham who accompanied RED BEARD convoys as their role was to maintain climatic conditions of the weapon during transit.

Air Commodore Allisstone commented in RAF Historical Society Journal 35: "...Most stocks of RAF nuclear weapons were held forward in the SSAs [special storage areas] and were rotated through the depots for periodic servicing; depot stocks were, we understood, intended mainly for 'second strike' sorties.  I  remember hoping that we would be able to get these weapons forward to front-line airfields and depart again before  they became the subject of further attention by Soviet Forces, although how long I expected to survive thereafter scarcely entered my head...

..."Initially at Barnham I was a Convoy Commander, which involved sitting for hours at a time in a modified Morris J2 van with local radio communications, in charge of several six-wheeled Leyland Hippo load-carriers and a posse of RAF Policemotor-cyclists, plus a specially designed fire / technical safety vehicle with an RAF Armaments specialist aboard.

We plied our trade between, on the ‘wholesale’ side, No 94 MU at Top Site, RAF Barnham and various Royal Ordnance Factories, especially Burghfield near Reading, the Atomic Weapons Research Establishment at Aldermaston and sundry other suppliers such as manufacturers of tail unit sections, some of which went to quite unusual lengths to disguise what they actually did, including operating out of semi-derelict premises, Nissen huts, etc.

Our ‘retail’ operations took us out from the depot to the Special Storage Areas (SSA) at V-Force stations such as Honington, Wittering and Cottesmore in what was for us the south of England because there was a sister depot (No 92MU on the site of a WWII airfield at RAF Faldingworth, near Lincoln) which tended to deal with Bomber Command stations in the north..."

Complete BLUE DANUBE bombs were so large that they could only be transported by road in a special-to-type totally-enclosed trailer, officially known as Pantechnicons.  They were towed by heavy duty Scammell tugs (or 'wreckers'), each of which had a small crane. They could be used for vehicle recovery in the event of a road accident but their primary tasks were, using their crane, to winch the weapon on its bomb trolley into the rear of the pantechnicon and then to act as its prime mover.  For security reasons, the radioactive core of the weapon was never transported in situ within the weapon, or even in the same convoy. 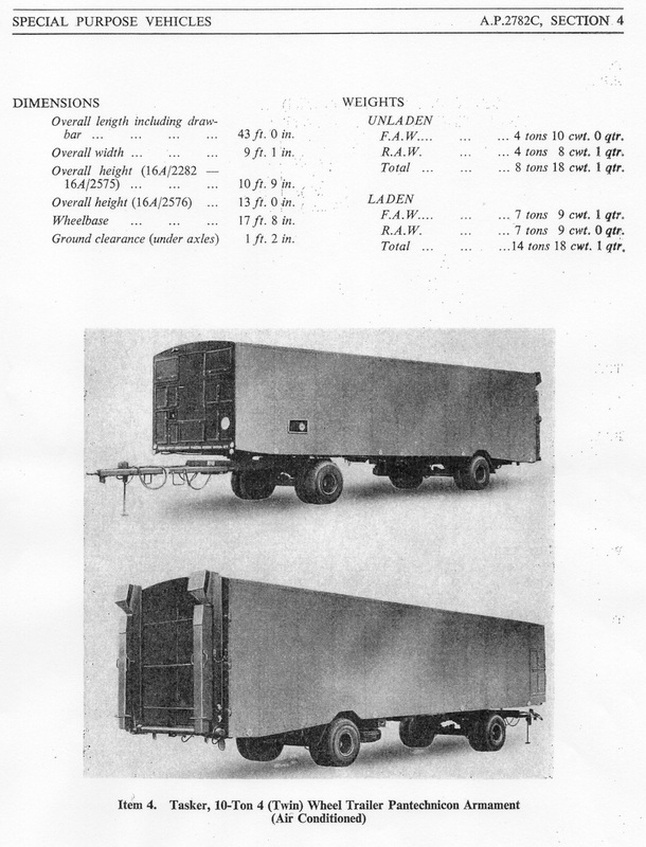 Picture NC1a © Crown Copyright, courtesy of the RAF Museum Research and Information Services. Pantechnicon Trailer as used to transport the BLUE DANUBE Bomb.
RED BEARD, a much smaller-sized bomb, was transported by road in specially-modified Leyland Hippo load-carriers. The weapon, , transported in sections, was placed inside a heavily-reinforced transit container called a stillage which was lifted aboard the Hippo and then securely anchored to the floor of the vehicle.  These Hippos were fitted with spark arrestors just underneath the radiator.

Mr Morgan recounted that during his time, 1960-1961, the convoys went out on a Monday and came back on a Tuesday, or out on a Thursday and back on a Friday.  They would deliver the trucks with empty boxes/stillages to the Royal Ordnance Factory and then would collect them the next day when they had been loaded, with the convoy crews staying in civilian accommodation overnight.

Air Commodore Allisstone accounts further in Journal 35: "There were scarcely any motorways in those days and I remember taking convoys through many towns, and especially through the middle of Maidenhead.  The Hippos' exhaust pipes were fitted with spark-arrestors which gave out a loud banshee wail, such that everyone knew we were coming from that alone, not withstanding the police escorts, etc.  These pipes were positioned so that they exhausted to the front right-hand side of the vehicle, about two feet off the ground.  In Maidenhead's one-way High Street the Hippo drivers discovered that, by blipping their throttles at the right moment, they could lift the mini-skirts of the girls on the pavement alongside them - so our progress through such places was both noisy and hilarious, besides doubtless being known to every Soviet agent within half-a-mile of our route!"
Police Motorcycles were used to escort the convoys, reportedly Triumph TRW 500 side valve with a rigid rear end.  This bike was built purposely for the military and as a consequence of the rigid rear end caused many accidents in winter.  Such was the problem that any of the RAFP at the site with motorcycle licences were listed in case the X-flight motorcyclist numbers decreased too much.  The motorcycle escorts were issued with an automatic pistol in a shoulder holster, possibly a Belgian .32.  One former X-Flight RAFP has recalled "The X-Flight motocyclist hada very prestigious duty.  It was their task to move the convoy in the safest and most efficient manner to the destination.  However, situations out of the convoy's control could occur, such as accidents, severe weather or vehicle breakdown; the Convoy Commander had procedures to follow when these situations occured.  In the days of few motorways and where roads were mostly ordinary single carriageway and with having to pass through towns, safekeeping the convoy together was no easy task.  Teamwork was essential between the motorcyclist. They were constantly controlling traffic at crossroads, T-junctions and roundabouts to let the convoy through without stopping. 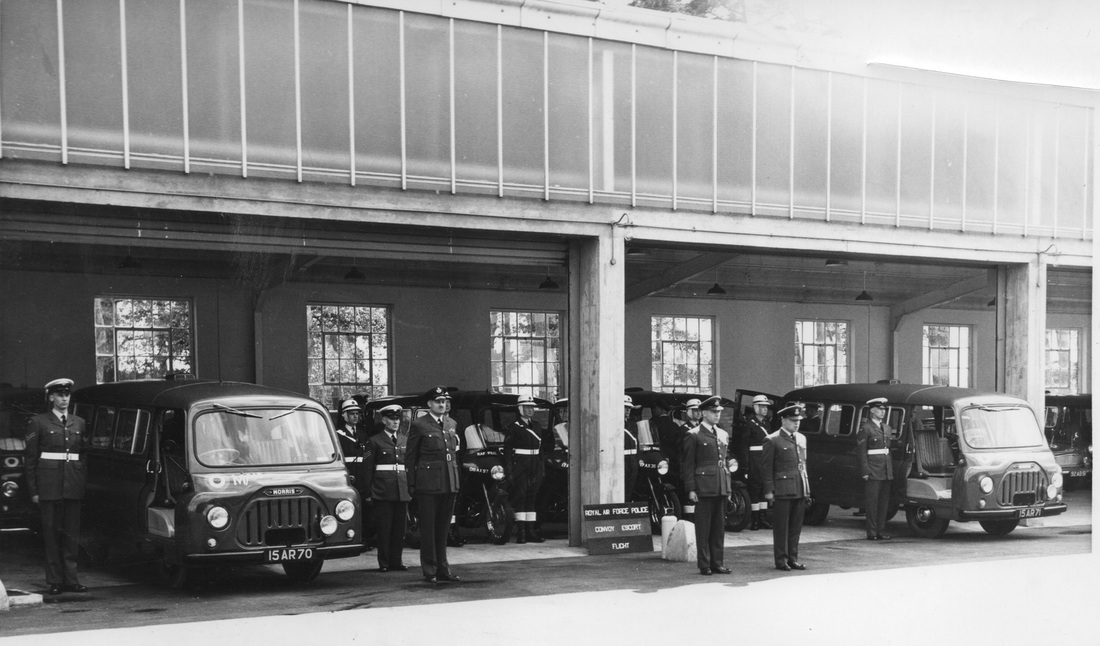 Picture NC7 © John "Wedders" Wedlake via WO Wyatt (deceased).  An Air Officer Commanding's inspection in may 1961, looking at the RAFP Convoy Escort Flight, probably in the MT yard at Barnham's Domestic Site.  Morris J2s and faired Triumph TRW 500s are the main vehicles on display, with a probable Standard Ensign grill visible in the far right of the image.  From our left to right is WO Wyatt and Flying Officers Ardley and Cave at the very front of the inspection.  The reviewing party can be seen to our right of the central pillar facing backwards. 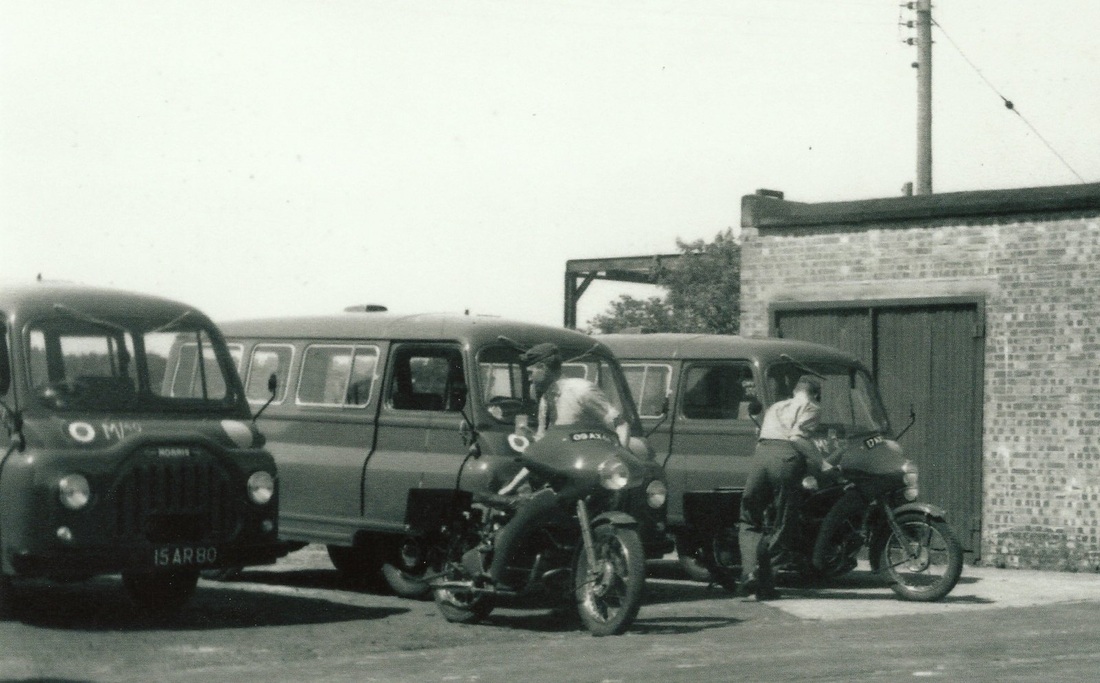 Picture NC8 © Anon 5.  Vehicles being prepared for a weekly inspection c1959.  The provider of this photo remarked that "the vehicles of X-Flight wre maintained to a very high standard. The vehicles were inspected weekly by a Provost Officer and RAFP of X-Flight received many commendations for the immaculate condition of their vehicles, including one from the Air Officer Commanding.

In RAF Historical Society Journal No 35, Air Commodore Allisstone wrote:  "...If convoys had explosive components or cores aboard and thunderstorms threatened, we were required to find the nearest parking area and pull in until the squall had passed.  This was not always easy, as we often had three Hippos, two J2s and the safety van plus four police motorcycles to accommodate, and most laybys were too small.

On one occasion a storm beat us to it; there was increasing lightning and a lot of noise, and then one exceptionally vivid flash hit a lamp post right alongside one of the still-mobile Hippos just ahead of me, followed by the loudest thunderclap I have ever encountered.  The Hippo swerved into the middle of the road and stopped almost dead in its tracks - and so did the rest of the convoy.  As the RAF Police closed the carriageways in both directions I leapt out of my J2 and went round to the Hippo where the driver was sitting transfixed and completely dumb-struck.  We lifted him out of the cab, stiff as a board and, still in the sitting position, laid him as gently as we could on the floor of my van.  We then put the relief driver in his place and got the convoy moving again as quickly as possible.

It transpired that our victim, having the seen the flash and heard the enormous explosion just to his rear, was convinced that the load he was carrying had blown up and that he was dead.  It took him several days to recover...."

Also in RAF Journal 35, Air Commodore Allisstone remembered the following event, after he had been reassigned as 94 MU's Stock Control Officer, in charge of record-keeping and convoy scheduling.  As such he was responsible for reporting directly to No 10 Downing Street if an accident occurred involving a nuclear weapon, a procedure known as 'Broken Arrow':  "...I only had to activate this link once, when one of our load-carriers experienced a runaway engine at the top of a hill on the outskirts of Reading.  The crew had used the standard procedure (for this was not an uncommon occurrence) of ratchetting up the hand-brake and attempting to stall the, otherwise unstoppable, engine by putting it into gear and letting in the clutch.  On this occasion, however, it kept running until the clutch eventually burned out amid clouds of white smoke.  With the engine screaming, and apparently about to explode, the occupants evacuated the cab and the driver then bravely attempted to turn off the external fuel cock.  Unfortunately, before he could complete his task the vibration released the hand-brake. The driverless Hippo set off down the hill and, at the first bend it encountered, embedded itself in the front room of a terraced house.

Fortunately the sole elderly occupant was in the back kitchen at the time, from which she emerged, dusty but unhurt, to offer everyone a cup of tea!  The RAF Police did a good job of keeping the local press, etc at a safe distance and the only national publicity was a small headline in one tabloid the following day entitled 'The Secret Something in Widow's Parlour'..."

John "Wedders" Wedlake  recalled several stories about his time on X-flight with the nuclear escort convoys, usually on arrival at the airfields.  One story he could remember was when one of the motorcycle escorts was knocked off his bike by an emergency flare whilst transiting to the supplementary storage area.  The motorcyclist had ignored the red airfield stop light, indicating that an aircraft was landing.  The flare was meant to warn the aircraft from landing but instead hit the policeman.

He also recalls a mix up had been made in which direction to travel around the airfield's perimeter taxiway.  The whole convoy found itself facing a taxiing V-bomber, with the aircraft having to give way to the convoy, against the normal principles of airfield discipline involving vehicles and aircraft.