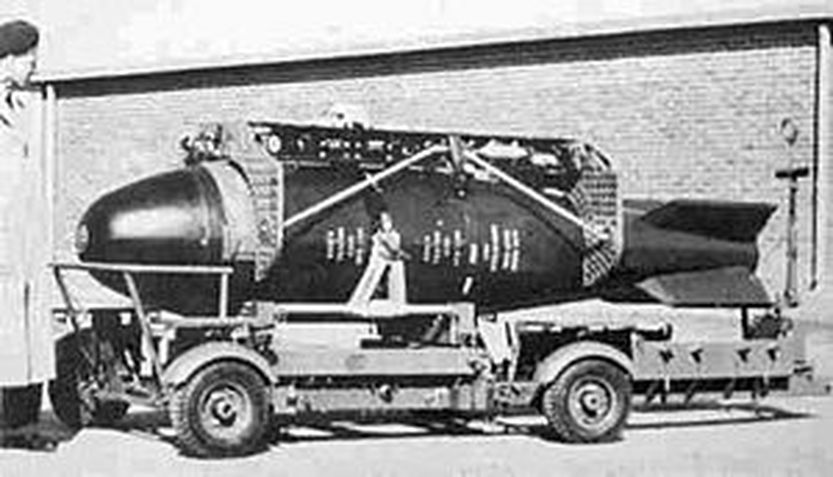 ©  Crown Copyright.  A RED BEARD on a Type-J Trolley with drop harness.  Please note the man to the left for scale.  This weapon was significantly smaller than the BLUE DANUBE bomb that it replaced.

The following has been taken from Wikipedia in September 2013.
Red Beard was the first British tactical nuclear weapon. It was carried by the English Electric Canberra and the V bombers of the Royal Air Force, and by the Blackburn Buccaneers, Sea Vixens and Supermarine Scimitars of the Royal Navy's Fleet Air Arm. Developed to Operational Requirement 1127 (OR.1127),[1] it entered service in 1962 and was withdrawn in 1971.

Design
Red Beard was an unboosted fission weapon that used a composite core (mixed core in British terminology of the time). The composite core used both weapons-grade plutonium and weapons-grade uranium-235, and was intended to minimise the risk of predetonation that was a feature of all-plutonium designs of that period with yields larger than 10 kilotons. An added benefit of the composite core was a more economical use of fissile material. The design was tested twice during the Operation Buffalo series of nuclear trials at Maralinga in Australia - first on 27 September (a 15 kt explosion, after which the resulting mushroom cloud rose to a height of 11,430 metres) and again on 22 October 1956. Although the design concept of Red Beard was similar to that of the Blue Danube warhead, an innovative means of implosion meant that its overall size could be significantly reduced.[verification needed]

Its measurements were 3.66 m (12 ft) in length, 0.71 m (28 in) in diameter and with a weight of approximately 1,750 lb (794 kg). Two versions were produced: the Mk 1, with a yield of 15 kilotons, and the Mk 2, with a yield of 25 kt. The Mk.2 was available in two variants, the No.1 used by high-altitude bombers, and the No.2 variant that was intended for low-level delivery by the Toss bombing method, and its "over-the-shoulder" variant referred to as the Low-Altitude-Bombing-System (LABS).

Weighing in at approximately 1,750 lb (794 kg), Red Beard was considerably lighter than the official service designation, which was based on the original technical requirement.

A significant improvement on Red Beard's predecessor, Blue Danube, was in the provision of electrical power for the bomb firing mechanism and the radar (altimeter) fuzing. Blue Danube had used 6 volt dc lead-acid accumulators  that were unreliable and had to be installed at the last minute before take-off. There were also potential risks associated with "stray" electrical discharges to the firing mechanisms which might have led to accidental detonation. Red Beard used twin ram-air turbines located in the nose, from which there could be no stray discharges before bomb release. The air inlet can be seen in the extreme nose. They exhausted through "blow-out" patches in the nose sides. Until bomb release, the weapon drew electrical power from the aircraft for heating and pre-heating of the radar fuzes.

Like Blue Danube, the body diameter at 28 in (0.71 m) was greater than was desirable relative to the overall length of 12 ft (3.66 m). To compensate for this stubbiness, and quickly stabilise the bomb after release, Red Beard was equipped with flip-out fins that were activated pneumatically, triggered by a lanyard attached to the aircraft.

As with Blue Danube, the fuzing arrangements were composed of twin radar fuzes that were activated by a barometric "gate" after release. The barometric gate ensured that the radar fuzes were switched on in the last few seconds of free-fall to a computed burst height, and this technique minimised the possibility of radar countermeasures disabling the radar fuzes. There were back-up contact and graze fuzes to ensure bomb destruction in the event of a misfire.

None of the variants were capable of being armed in flight - "In Flight Insertion" (IFI) of the fissile core. The core was inserted before take-off in a process referred to as Last Minute Loading (LML). For carrier-borne aircraft, landing with the armed weapon was forbidden and the aircraft would instead be diverted to a shore-base. Although the Royal Navy required its Sea Vixen aircraft to be type-approved for Red Beard carriage as "insurance" against delays in Buccaneer development, the Sea Vixen never deployed in the nuclear strike role. Early models were subject to severe environmental limitations, especially when loaded into Royal Navy Scimitars on exposed aircraft carrier decks in Northern waters. The Mk.2 variants were better engineered to withstand extreme conditions, and other than the yield difference, this was the main area of difference.

When the bomb was delivered by low-level toss bombing, the aircraft was almost always at a lower altitude than the burst height; so in effect, the bomb was not really "dropped", but was released and "flew" upwards in a ballistic trajectory, to detonate when it reached the required altitude.

Before the Red Beard codename was issued in 1952, it was frequently referred to in official documents as the "Javelin Bomb", because it was originally conceived as a weapon for the "thin-wing Javelin bomber", a projected derivative of the (thick wing) Gloster Javelin all-weather fighter. The designation "Target Marker Bomb" was a euphemism used to disguise the nature of the bomb, so that its dimensions and weights etc. could be circulated to aircraft and aircraft equipment designers without compromising security.

RED BEARD AT RAF COSFORD. © 'Paul Collins' and lifted from Wikipedia.
Powered by